I have two blank reversible jerseys left for $25 a piece. One large and one Med. All those with the blank jerseys (Michigan John and I can't remember the other one, Rainer?) can place a group order with Gary and get there Tsunami logos and number on! let me know when you do this so you don't pick a number that is already taken.

Game on! I missed last week, but with a little practice these past few days, it's like there's been a laser on my blade that lights up my target! Goal! Goal! Goal! Netminders, get nervous! Leave comments if you're coming.

Benny and I are meeting early, about 12:30, to finish off the fencing, and make a few minor adjustments. We could use another body or two. Who can help? Donuts perhaps.

I have been in contact with Mike Schweighardt, who is the president of the Western Vice President
Canadian Ball Hockey Association(who knew?) about our team entering their tournament in August.

This is the pertinent information:

Looks like Benny D and his Penguins have won the stanley cup lottery this year.

I've noticed a lack of support in the running shoes I've been playing with the past year, which culminated saturday in my rolling my ankle over the ball. I think part of the problem is these shoes were bought specifically for jogging, and not cross-training type activities.

My thoughts are that tennis shoes or basketball shoes would be better. They'd offer the added ankle support needed when stop-and-going, turning, etc....body movements we see in street hockey that are similar to… Continue

Great games yesterday everybody was going 110%, great work, amazing actually, incredible intensity out there, awesome games, stellar goal tending, fast line changes, snipe shots, good passing, OK thats all I got to say about the games. hah..Now that I have your attention hopefully will anybody with a truck help me haul the extra 2 nets from St. Johns down to 42nd St. with me Sunday (today) or sometime this week. I will pay you $10 bucks for the gas and 30 minutes time, let me know that would be… Continue

Vinny - I just realized we dont have any Tuscon photos up here. We should get the team photo etc up. Need a record of all of our tours!

First time (for me) playing with the new boards last week and I gotta say it's a whole new game! No chasing around, board passes, etc, looks almost legit!

Many of us had the spiffy new tsunami black - white reversible jerseys at the game and it makes changing team way slicker than passing around the nasty yellow pinnies. Just flip your jersey and yer done.
Drop a line to Gary Rededekop if you want one… Continue

Everyone mark your calendars for Saturday June 14, 2008 for the all day Canada vs USA extravaganza! More details to follow in the coming months.

I NEED HELP SETTING UP OUR NEW FENCING! In order that we can start playing at 2, we need a little time to get oriented and set up. Is anyone willing/able to meet me at St. John's at 1:15-1:30? We'll carry/drive over the bales and get going! I'll be there! Please post comments!

I was hoping the tournament might recognize someone from our team...even if it was a most improved award, but I have yet to hear from ANYONE about that. So here are my team awards.


Seattle Tsunami MVP: Dan "The Goalie" 2.8 goals per game not bad, minus that first drubbing 1.5. Next trip I will learn his last name, but he came up stellar for us after that 22 minute 8-0 barrage he faced. I think most of us agree we would have feigned injury following the game, but he kept with…

We came, we played hard, and we had a great fucking time doing it. First game was vs. an all-star team from New Jersey. They mercy'd us 8 to 0 and had us thinking "what the fuck just happened"(chuck quote) every time we came off the floor. New Jersey ended up winning the tournament allowing only 3 goals in all of their games.

Second game was against a tall group of guys from Calgary. We were in the game the whole time but came up short losing 1 to 0. After the game we went outside and… Continue

Hey wondering if anyone is still planning on playing today, If so I'll drive over.

Hope the lads are kicking butt!

Yo fellas...hope things are going well. I was trying to find an update from one of the many street hockey websites as to the tourney and how it's progressing. Post an update when you get a chance. Maybe take a quick picture of a bracket, and submit.

Shitty start to the weekend . . . get ready to laugh. so i'm in the office, aKa the honey bucket, and my cell phone falls out my pocket and into the sludge-- gone forever! i no longer have anyone's phone number. perfect timing for this weekend and the T-Birds game tonight.

If anyone sees this please call me on my new cell phone so that i can get your number and also meet up with everybody at the game tonight.

Just got this in my box and posting it before I forget. Let's do Vegas first and see how we do...

At the risk of stealing Benny's thunder...

Ben did a simple search online for Seattle street hockey (in general) and found a picture of us playing on a Saturday. The picture was through flickr. So, I went to flickr to see what else was there. I found 6 pictures in total. They're pretty good. It's pretty cool, but do any of you remember the clandestine photographer a while back, hunkered down by the dumpster on the other side of the fence? Creepy-ish. These have to be by her. (Three… 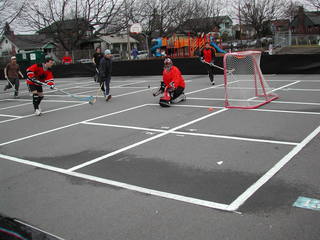 Finally . . . some real boards that actually work! First off thanks to Adam for coming early and helping me set things up; I wouldn't have been able to do it without him. I really think we have it licked-- after a couple weekends of setting them up and taking them down, it'll be second nature and a breeze in my opinion. There's a couple things to be fine-tuned and I'm gonna list some stuff on this blog because after the Vegas tourney (Vegas… Continue

Today's games were surely better than the rest. The boards system that Benny and Adam spent hours putting together made a huge difference in the speed and scoring of each game. Thanks guys.

We stayed with the same teams the entire time and some strong chemistry was built between Doucette, Saliba, and Werbicki, and I thought Peto and Marshy played well together too. Adam played well out there, and you can tell he's been working on his stick work.

The goalies were… Continue

I can't make it this week so someone will have to get the gear from my garage (5831 Woodlawn Ave). Benny is supposedly unveiling the brand spanking new boards this week! Show up a couple hours before the game to help him and Adam set it up for the first time!