Weather should be ok this Sat, mainly cloudy with showers. This means cloudy in Ballard. Who's in? Goalies?

They put in the portable today at Adams, so far our playing area looks clear. The only thing is they removed the tether ball poles and I don't know if they are going to re-install them in our play area. Who's in for a little post Can/Am hockey? Goalies? Sorry, no cheerleaders.

A short recap of the CanAm event.

Just thought I'd put together a small recap of the 2012 CanAm event.

Noticed this on the following web site:

"New for 2012, the Seattle Thunderbirds will be presenting a ball hockey
tournament.  Details coming soon!"

Love it!  Another chance for a street hockey tourney in the area.

Thanks for another great Can-Am game

Thanks to everyone for a great Can-Am game yesterday. Even though we lost, there was some great hockey, tempers were mostly held in check, and everyone had a good time.

Congratulations to Cory for winning the Koh Smythe. Enjoy that T-shirt sweater this year. Thank you especially for hosting all of us at your house.

Thanks to Mike Laing for overall coordination and working on the BBQ - the food truck was a great addition.

Thanks to Benny and Vincent for…

Just an FYI for those who played in the past or may want to be in this year's tournament, I received the following email:

This year’s Street Hockey tournament is tentatively scheduled for July 28.  Once all the details have been set, we’ll be posting information.

Director of Ticketing and Game Operations

I was going to try to make it up for the game. I am headed to Seattle for 6 months, and hopefully I will be able to get some Saturday games in. For Saturday's can-am game I have been told the USA ros…

I was going to try to make it up for the game. I am headed to Seattle for 6 months, and hopefully I will be able to get some Saturday games in. For Saturday's can-am game I have been told the USA roster is full. Although I don't publicize it, I have (gasp) French Canadian ancestry. Any chance I can make it on the other roster?

Here's the final CanAm roster for Canada. If your name is not on this list, we'll see you at the bbq!

I see the USA team has to turn them back at the door... Is our roster still open? Is anyone really paying attention on that? Haven't seen a post on it, but that doesn't mean there wasn't one. If someone could help a brother out and post who might be making it this weekend, maybe we could instill some fear into the hearts of our American counterparts.

Who's taking home the Koh Smythe this year? Seeing as we don't have a cup that I could use to give my daughter a bath in, I had to at least put her in the second best "trophy" in sports - the Koh Smythe. Who's going to take it home this year?

I also noticed something interesting - looking at the names on the back, the first three people no longer play with us (for various reasons), and the last two both…

This year's post-game BBQ is being hosted by Cory at 752 North Seventy-Eighth street (close to 80th and Linden).  While the team rosters are limited for the big game, everyone is welcome at the BBQ, so come on out even if you're not playing in the game.  Bring the wives and kids too!  The food starts serving at 6pm.

Thanks to everyone who emailed me regarding Team USA for this weekend's CanAm Series.

Probably the only logistical challenge for USA over the last few years has been too many players.  As captain…

I broke down and couldn't stand the suspense any longer. Who's in? Who's in goal? Weather is a perfect cloudy 60degF. 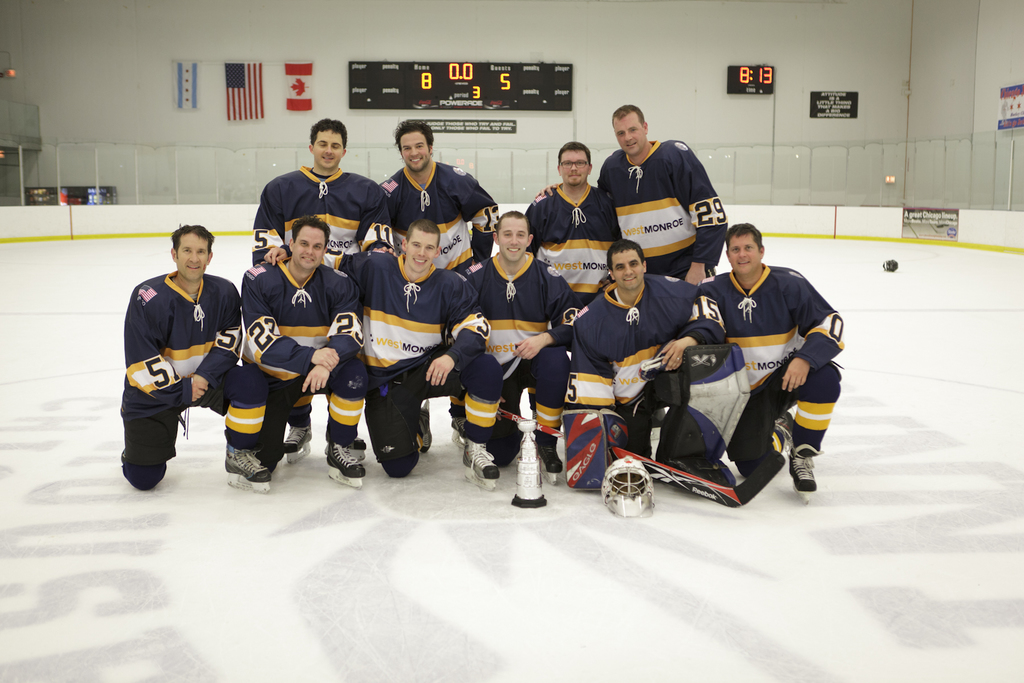 A few weeks ago, we had our own Can-Am game at work. In a precursor of what our Can-Am game will be like next week, the USA won by a score of 8-5. Yes, that is a mini Stanley Cup - we need to do something for our own game.

I'm out this week, but will be ready to go next week as the US wins our first Can-Am…