yo guys check it out

This league is for anybody who likes to play hockey. Whether it is your anti-drug or whatever, you can come play with us. Just remember to bring your A game.

PS- theres a good possibility im gonna be there next saturday for the game. also ghram when IN august is that tourney. and WHERE is it?

You wouldn't know it's spring by looking outside today. Playoffs just around the corner and Habs are where they belong - Ahead of the pens and sens... Can't wait for the the cup tourney to start.

It's about time - we have a partly cloudy day with a high in the 50's Saturday. Show up and play!!! Comment!!!

ha, brought ALL the sticks from the airport to Street Hockey the following Saturday after the Vegas Tourney. I put all the sticks down before we played. When we were done the only two sticks remaining were Corey S.'s wooden sticks. Sorry to Corey for ur other stick and Chuck for your stick but I figured somebody took them so they could give them to you and I wouldn't have to keep hauling them back home via BUS and back the next Saturday. Plus, if you wanted to not lose your stick in the first… Continue

We had a wet one today. It seemed the darkest cloud hung over Greenwood Elementary while blue skies appeared to the north and south. Pond hockey no doubt!

I'm terrible at remembering the highlights of the day's game, so please post your comments if you have something to add.

Despite the wet we had some great games today. I'm really liking the four-on-four scenarios. It keeps the game open and allows for a lot easier and better movement. Today the play was excellent with a… Continue

After a couple weeks of 90F+ lazy ass on the beach, can't wait to get back to the Greenwood Elementary Coliseum for a couple games of cold, wet, street hockey! See ya all at the game or for beers after at St.Andrews.

Come and skate and/or play broomball with the CAS! Bring your family, bring your friends! Score a deal!
The day will include weekend arena… Continue

They were hugging and smiling. They were congratulating one another. They were players from both teams.


After eight overtimes in the Division 1 state championship hockey game Saturday, players from both Marquette and Orchard Lake St. Mary's huddled together, posed for pictures and lifted the state championship trophy.
The score was 1-1 after 109 minutes of play, and the Michigan High School Athletic… Continue

I just wanted to follow-up by stating that I have officially been offered a position on the Board of Directors for the American Street Hockey Institute, which will be taking over as the governing body for our sport in the U.S. I've included below a copy of the email announcement made by Ken Cashman of Mylec, which is sponsoring the organization.

The goal of the organization will be to promote growth of the sport in both existing and new areas of the U.S.… Continue

First off, my apologies for not contacting you since the Vegas event. It literally took me almost a week to recover and get baack to the normal routine. It was a LONG weekend to say the least.

That said, I hope you all enjoyed yourselves at the tournament. Given the fact that it was your first-ever tournament as representing Seattle Street Hockey, your performance was amazing. There were seasoned tournament teams present that didn't have the drive, desire,… Continue

Extra sticks I picked up from Vegas. Let me know if one is yours, otherwise I got dibs on the Easton , and the Koho is going to Blaget(sp?), the guy Cory calls Lars. 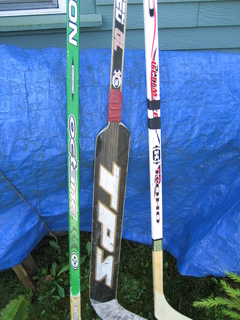