Does anyone want to play goal tomorrow?  I may only be able to stop by for a hour or so and wouldn't mind playing out. Dan is out of town, so let me know if there are other goalies around. Anthony? Bryan?

Who else is in?

It's that time of year again, lads.  I just got the email from Canucks tix sales about reserving a hospitality suite.  And guess what, prices have gone up again!

It's $5450 for a suite with 24 tix.  This comes out to about $225/person.  The suite now includes a $500 food and beverage credit which Payette would likely absorb by the first intermission, leaving the rest of us to purchase…

We might as well enjoy the summer weather while we can, so who's up for hockey on Wednesday?  6 PM at Adams - I'll be in goal.

Who's up for hockey tomorrow (Wednesday, July 20th)?  6 PM at Adams, then somewhere to watch Man U. vs. the Sounders.  I'll be in goal.

I'm NOT organizing this one, so for details, go to Rob Anthony's post entitled "2nd Update - 2011 Everett Silvertips 4-on4 Tournement..." Here's the link:

We have 3 teams registered so far.

One is totally set.

Ok, I see that a bunch of people are in Everett.  This is when it fits our schedule...hope some can still swing by.

If you can make it jot me a quick email so I can plan out food a bit.  I think Kelly sent out an evite too.

Lighting a fire later so a sweater is always handy.  Kids = yes.

An extra chair or two might be put to…

Who's in this Sat? Goalies? Weather should be ok with sunbreaks and showers.

Hey Gents -- this may seem like an odd request but thought I'd give it a shot.   I played a few times with you guys a couple of years ago, regrets that I haven't been able to come back as I had a great time and you guys are great.  So...  I've entered a team in the Everett Street Tourney on July 23rd, and our goalie dropped out last minute.   So I got someone else taking over, but he has no gear.   I see that you guys already have at least 3 teams registered so all of your goalies must be…

This Fall, West Seattle's Hiawatha Community Center agreed to try a once-a-week in-the-gym hockey for kids (shoes, no blades.)  Sundays from 3 to 5.  It will be for two groups: 4 to 7 and 8 to 11 year olds.  I am hopeful it will take off, and I am interested in your comments and questions.  Imagine if other neighborhoods get this going...we could see Ballard vs. West Seattle; West Seattle vs. First Hill; etc.  If anyone is interested in trying to set up other…


I'm out so someone come get the nets. 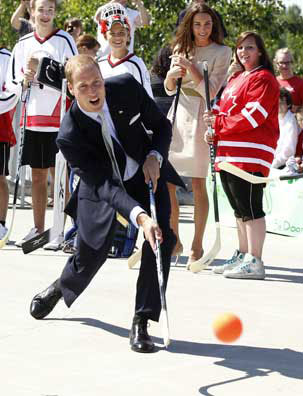 if only deuce was home to school the prince...

The 2nd Annual Everett Silvertips 4 on 4 Hockey Challenge will be held on Saturday July 23rd.  See the attached for more information on the tourney:

I been driving up to vancouver to play street/ball hockey because I'm from there and know people there, but was wondering if people play often, what skill level, and where they play in the east side or whereever.  If there are any pick up games on Sundays to Tuesdays let me know.

Hey guys, short notice yes, but if you're interested, me and a bunch of guys from my work are hooking up at noon today at Marymoor Park in Redmond at the far east parking lots to play some hockey.  You're all invited.