SSH 2018 BBQ & Fundraiser is THIS SATURDAY

A reminder of our annual SSH Family BBQ this coming Saturday, June 2nd. All SSH community members past and present are welcome, regardless of whether you're playing in the Can/Am game earlier in the day. Bring the kids and your appetite...and some cash to donate to the general SSH cause as well as to chip in for all the food and beer. This is our main fundraiser of the year so if you haven't paid your ~$50 annual dues yet, this is the time to do it. If…

This Day in Hockey History

May 26th, 1992 - Mario Lemieux scored twice to lead the Penguins to a 5-4 win over Chicago, in Game One of the Stanley Cup Finals, at the Civic Arena. The win ended the Blackhawks' Stanley Cup playoff record of 11 straight victories in one year.

Can we actually start at 1 PM? I know Dan Z will be on time if hes in this week. Anybody else? Caps game at 4:15 afterwards

Get your piece of SSH history

By popular demand, Rob Emma will be selling these signed (jersey number included!) street hockey balls at all future SSH games. The going rate $5.99 although Rob is open to haggling. All proceeds will go to Emerald Downs racetrack. 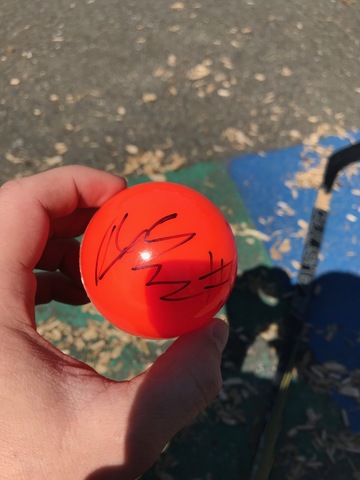 Note:  This is satire - I don't believe Rob is…

Cinco de Mayo Hockey - where my goalies at?

Forecast is 60 and sunny.